Nature and Character of the British Shorthair Cat 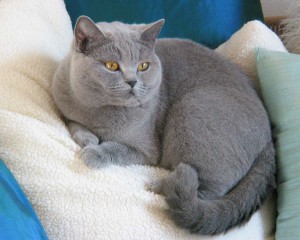 The British Shorthair cat is very easy to look after. Even if you’re new to keeping cats, this beautiful cat can bring lots of pleasure, and little stress. They have as few problems with their health as they do with their moods. The British Shorthair cat has maintained all its physical strength, endless energy, confident instincts and fearless mentality through to the present day. The cats slot into normal family life without much fuss, and, thanks to their easy-going nature, get on incredibly well with children and other pets. It is definitely easier to look after these calm shorthair cats than longhair cats. All that needs doing is brushing out loose hairs once a week. The British Shorthair cat is an ideal addition to the home thanks to its strong need for companionship, and its always pleasant and curious nature.

The Breed Standard for the British Shorthair Cat 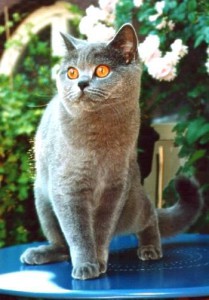 Shape: Body large or medium-sized, muscular, broad chest, shoulders and back large and wide. Legs and feet short and stocky. Paws round and powerful. The tail is short and thick with a round tip. Solid and powerful, but still well-proportioned. With a good bone structure, a British Shorthair should have the appearance of a “round”, compact cat with a cobby body.
Head: The head is round and sturdy with a broad skull, very well developed neck, short and powerful. Strong chin. Nose short and wide, straight, gentle curve to the nose, only slight indentation.
Ears: Ears short and wide, gently rounded.
Eyes: Eye shape is large, round and broadly spaced, wide open.
Coat: The coat is short and dense all over, never sparse, with a thick, well-insulating undercoat. Not too soft – can be “crisp” to the touch and stand off from the body in a “fluffy” manner. Each hair should be the same colour from root to tip. 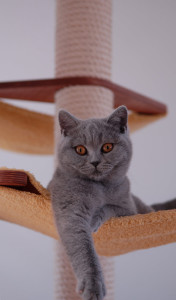 The History of the British Shorthair Cat

The history of the British Shorthair begins around 2000 years ago, when Roman soldiers brought the first cats to Britain to catch mice and rats in farms and storehouses.

The Romans were pushed out of Britain – but the cats remained and developed into the British version of the domestic cat. Nobody is quite sure if they bred with indigenous wild cats (felis silvestris): the one thing we can be sure of is that, thanks to the island’s isolated location, the cats have reproduced without being influenced by other cat breeds.

Over many centuries, the British cat developed organically into a shorthaired, sturdy, powerful cat with a water-repellent coat. They are good at catching mice, and make friendly, even-tempered pets.

In England, the home of cat breeding, the first cat shows took place in 1870. For the first few years, breeders focused on Persian cats, which, with blue and white coats, were the “in thing” in terms of purebred cats. A little while later, people experimented by crossing particularly beautiful, native shorthair domestic cats with longhair Persian cats. 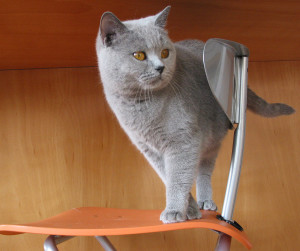 Whether curiosity, a desire to experiment, or maybe breeders’ ambition to transfer the Persian’s coat and eye colour to the shorthair European domestic cat: nowadays, nobody can say for certain what caused the first crossbreedings.
One thing is for sure – that the evenly blue, shorthair offspring of these interbreedings were the early ancestors of our British Shorthair cats.
In 1911 a shorthair blue cat owned by a certain Miss Cochrane won the “Best in Show” prize at a cat show.
This was certainly the point at which the cat was recognised as a breed in its own right, because a short time later, the British Shorthair was officially recognised as a breed by what was then Cat Fancy, and the first standards for breeding were laid down.

At the start of the 20th Century, British Shorthair cats were exhibited in great numbers.

Their shape was generally defined in the standards as compact with a large, round head and round eyes, short, dense coat with a delicate texture and thick undercoat. 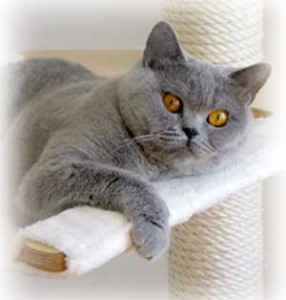 The World Wars left their mark on the British Shorthair cat, along with almost every cat breed. In a time in which food was scarce and large amounts of the population had other things to worry about, many precious cat breeds were lost.

It became hard to find suitable toms for breeding. For this reason, breeders decided to cross-breed cats: breeding cats from one breed with cats from another breed.

After crossbreeding with domestic cats failed to lead to success, because the offspring were not the right type, people remembered the early days of breeding, and started to cross them with Persians, despite the problems posed by their long hair. The Persian’s long coat can also be passed down as a result of this pairing – and even today, thanks to a certain genetic leaning, it is possible to see British Shorthair cats with long hair.

In some cat breeding organisations, cats of this type were granted a pedigree, but were not allowed to be bred further. Other organisations came to a different conclusion, giving the longhaired version of the British Shorthair its own name (Highlander), and breeding them selectively. The Highlander combines the long hair of a Persian with the British body structure and face – put simply: a Persian with a nose. 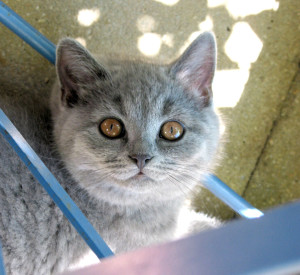 Another breed that was in the spotlight after the Second World War was the French Chartreux. Breeders of this variety also had problems because of the reduction in breeding stock during the war, and turned to British Shorthair toms to boost their numbers.

The cross between Chartreux, British Shorthairs and Persians led to the European association of cat breeders, FIFe, in 1970 designating the exhibition class of “Chartreux” for all blue shorthair cats and “British Shorthair” for all other cats of this origin who were not blue.

This decision was only changed in 1977 after long protests by Chartreux breeders. Since this point, British Shorthairs have no longer been allowed to be called “Chartreux”. The official breed titles are “Chartreux” (CHA) and “British Shorthair” (BRI).

A similar debate raged with breeders of the European Shorthair, which was and is particularly popular in Scandinavian countries. Even today, this cat is pure bred, and, just like every other pure-bred cat, has its own pedigree. 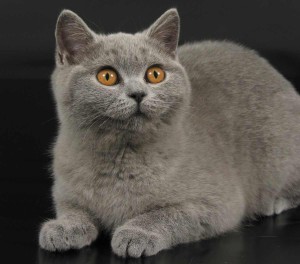 Until the 1980s, cat shows combined European Shorthairs and British Shorthairs into one category for exhibition and ranking. The judges tended to prefer the British – probably because their more compact body and rounder head made them look cuter. Scandinavian breeders were not impressed by this development, and wanted their preferred cat breed to be maintained. They pressed for FIFe to recognise the European Shorthair – which it eventually did. 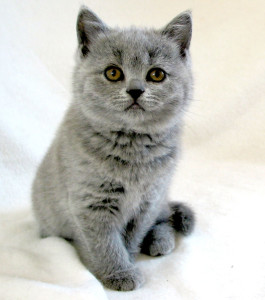 Today, British Shorthair cats are available in a range of colours. One colour, with two or three colours, tabby cats and with tiger stripes. There’s blue, cream, lilac, black…

Even if their coats come in a rainbow of colours: all British Shorthairs share the same kind, gentle nature.

Make your own cat toy – a DIY workshop
Scroll to top